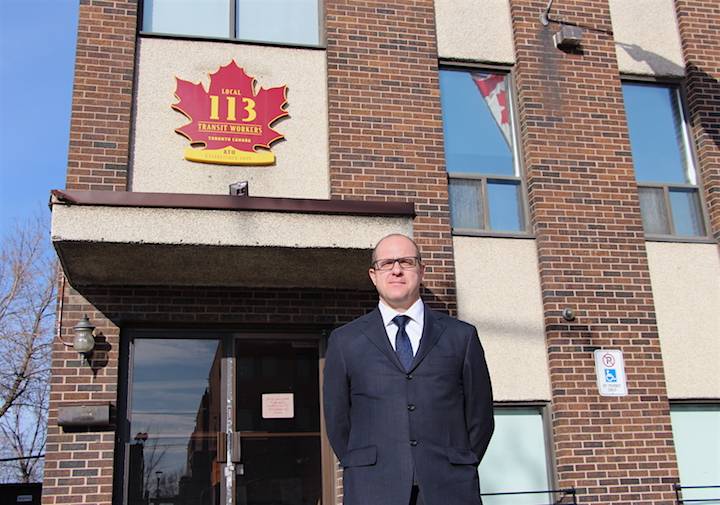 Last month, workers of the Amalgamated Transit Union (ATU) Local 113 went to the ballot box for the fourth time in the last three years. These union members make up the main workforce of the Toronto Transit Commission (TTC), with 10,500 workers forming the lifeblood of the city’s public transit system and collectively moving millions of passengers every day. For these workers, this recent election followed a difficult period in which the accountability and willingness to fight of its previous leaders were repeatedly put into question. On this occasion, however, the desire of the rank and file for change was fulfilled as establishment candidate Frank Grimaldi was defeated by grassroots challenger Carlos Santos with 53 per cent of the vote. This change in leadership represents a significant development inside one of the most powerful union locals in the province, and should be seen as a step forward in the fight against the anti-worker Doug Ford regime.

In his campaign, Santos focused on the need to confront Ford’s privatization agenda, particularly around the planned upload of subway operations to the province in the New Year. In his own words, Santos declared: “I want my daughter to know that I did my part to fight Ford’s austerity program, that I didn’t just stand by and watch him dismantle Ontario’s public transit system, privatizing what’s profitable and leaving the public to pay for everything that’s not.” For rank-and-file ATU members who are sick and tired of inaction in the face of the bosses’ attacks, it is encouraging to hear Santos speak of the need for militancy. Here he asserts, “We will shut down the city’s central nervous system if necessary – and we will do this in close alliance with other unions, community groups and the growing resistance to Ford’s privatization plans.”

For Santos, in this, his third attempt at the union presidency, victory had much to do with increased voter turnout from the 10,500 members of the local. There were 7,242 votes cast in this election, up from 5,883 in 2017 and 4,421 in 2016. This greater participation rate made all the difference, as Santos went from 38.59 per cent of the vote in 2016, to 49.84 per cent in 2017, to 53.25 per cent of the vote in 2018. This pattern revealed something which the Marxists of Fightback frequently point out in their analysis of election results, which is that those groups that typically do not vote (i.e. young people, those from marginalized communities, etc.) stand the most to gain by voting for candidates outside of the establishment running on militant, left-wing platforms. In this election, the increased turnout was undoubtedly due to a greater participation of junior bus, streetcar and subway drivers, thousands of whom have been hired in just the past 6-7 years to staff the TTC’s frontlines. These younger workers, having the most to gain, correctly saw the need for an alternative to the passivity and class collaboration of the past, and thus got up and voted for Santos.

The defeat of Grimaldi marks the first nail in the coffin for the model of business unionism. As an approach that elevates the principle of servile cooperation with management above that of strikes and political action, this is in reality a model that has never worked for anyone other than a very small handful of the most privileged workers in Canadian class society. In the midst of the current crisis of the capitalist system on a world scale, the bosses are less inclined than ever to cooperate with unions, and in fact are determined to bust them.

The record of the TTC over the past eight years is a testament to this fact. First, in 2011, the democratic right to strike of ATU workers was taken away. Then, only a year later, hundreds of ATU jobs were contracted out to the private sector, and reduced to poverty wages. More recently, the TTC has imposed a regime of random drug and alcohol testing, as well as prosecuting hundreds of union members for alleged benefits fraud. These manoeuvres are better conceived of as attacks, designed to drain the union’s resources via the necessary time and money required to defend members from these measures. Most recently, TTC management, under new union-busting CEO Rick Leary, demanded major concessions at the bargaining table in contract negotiations. Leary wanted to bring in part-time workers, eliminate job security, and give out wage increases that were well below the rate of inflation. Arbitrator William Kaplan thankfully rejected these demands in his final decision. However, all ATU workers should take stock and remember that this is what is at stake going forward. And management certainly has no plans to let up.

What is needed in this environment is not collaboration, but confrontation. Flashy business suits and handshakes need to give way to yellow vests and raised fists. After all, ATU workers are not just up against a ruthless employer. Behind Leary lies a rabid Premier, frothing at the mouth and determined to take his pound of flesh from the broader Ontarian working class. To this dog, Leary is but a tail to be wagged about, and so it is to the dog that we must take the fight.

During the recently arbitrated contract negotiations, Kaplan refused to renew a letter of understanding previously agreed to between the union and management, which provided for no further contracting out of TTC operations or maintenance. With this provision now eliminated, the door is wide open for Ford to move ahead with his plans to potentially privatize entire sections of the commission. The plan to upload the TTC’s subway network to the province in the new year is merely the first step in this process. As it gives primary control to the Premier’s office to implement privatization schemes freely, this plan is what should first be combated.

In fighting the privatization of public transit, however, ATU workers should know that they are not alone. The Doug Ford regime represents a threat to all workers, whether unionized or not, as well as to those that ride public transit as much as those that work it. The solution therefore is to build a broader fight back, through the larger organizations of labour and involving the broader masses of ordinary working people, to beat back Ford’s attacks.

Santos has an excellent opportunity to do just that. If he is to fulfil his potential, however, he must be prepared to mobilize ATU rank-and-file workers en masse, and connect with other unions, political and community groups to do the same. Engaging with the rank and file inside the local is particularly important, given the likelihood that there will be some form of bureaucratic resistance that emerges to such a militant approach at some point. While the business unionist approach of the Grimaldis has been defeated at the top of the union for now, the reality is that there is still a culture of careerism and bureaucratism that pervades the middle layers of leadership. To avoid sinking into this swamp, Santos must build a base of grassroots volunteers to assist in carrying out his programme, and not be afraid to call out hostile bureaucratic maneuvers when they arise. Santos has been given a strong democratic mandate by the membership of ATU 113 to revive the traditions of struggle that the union has been built on. It is now time to carry that out.