Union May Day in Montreal: We need a militant movement! 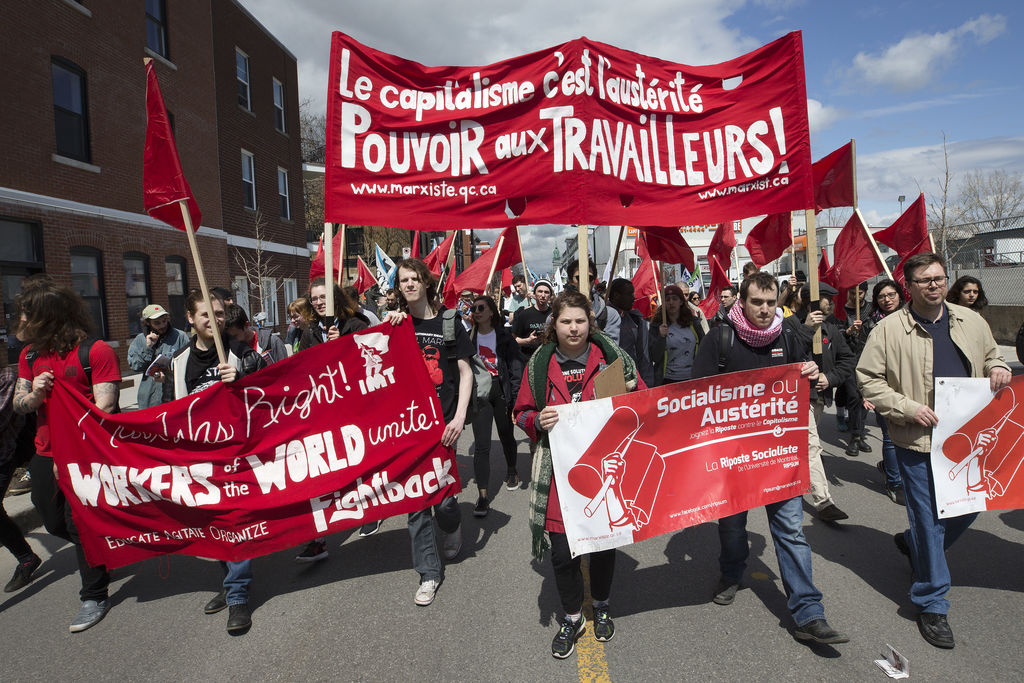 On Saturday, April 28, between 2-3,000 people attended a union-organized May Day demonstration held in Montreal. The demonstration lasted roughly four hours and consisted of a rally at the Olympic Stadium followed by a march to Parc des Faubourgs where union leaders delivered speeches. Socialist Fightback mobilized a sizable contingent to participate in the demonstration and spread socialist ideas among unionized workers.

While International Workers’ Day is technically on May 1 and this day has a long tradition in the workers’ movement in Quebec, the union leaders chose to hold the demonstration on the weekend before May 1 this year. The unions bussed in workers from all over Quebec to attend the demonstration. There were contingents of teachers, nurses, construction workers, public sector workers, and most notably, a group of locked-out metal workers from the ABI aluminum smelter in Bécancour. According to the FTQ website, around 22 unions and organizations mobilized to bring people out for the march.

After arriving at the park, there were a few short speeches from union leaders. One of the main focuses was the demand for a $15/hour minimum wage. Other issues of concern were the fight against tax havens for big corporations, a transition to sustainable energy jobs, and the fight to end the gender wage gap. These speeches were concluded by a short session with music and a DJ.

While mobilizing a few thousand workers in the streets to demand better living conditions for the working class is never a bad thing, it must be noted that the attendance at the last few May Day demonstrations has been quite disappointing. In the past, unions were capable of mobilizing tens of thousands, but recently participation has dwindled and the protest has taken the form of a party, with very few political speeches being made.

For all the demands made, there was no concrete plan of action put forward. With elections in six months and the real possibility of a CAQ government, one would think leadership would be proposing serious action to build a mass militant movement to fight. It is clear that the current efforts of the union leadership are not threatening to the capitalist parties. The fight for $15 has mostly been relegated to empty words churned out at events like this, with very little action to follow it up.

The capitalists in Quebec are more boldly pushing their agenda and we are in dire need of a bold and militant direction for the struggle. From the layoffs at IOC in Sept-Îles, to the lockout at ABI in Bécancour, we need to build a mass movement against the attacks of the capitalists.

The rise of the CAQ is a threat to the entire labour movement. François Legault has managed to capitalize on the growing dissatisfaction in society because there has not been a viable vehicle on the left. The unions are a powerful force in Quebec with huge resources, deep traditions, and the ability to mobilize hundreds of thousands of workers. If our leaders lifted so much as a finger, they could channel all of the pent-up anger into a mass movement of the working class against the capitalists and their parties, whether they be the governing Liberals, the rising CAQ, or the PQ.